On Christmas day I took off in my Passat wagon, filled with camera, climbing, and mountain biking gear towards New Mexico and Arizona. I didn’t have a set plan, but I was going to meet a friend in Sante Fe, NM and we would make our way to Flagstaff, AZ where a friend had just moved. I met up with Marie Sullivan, and we decided we wouldn’t wait around Sante Fe but head straight to Flagstaff the next day. She had to get back to SF to work the next Saturday and decided to drive separate, meaning I didn’t have to come back to Sante Fe on my way home. We met up with Alex Vidal and went to explore some trails around Flagstaff. Alex’s girlfriend’s sister’s husband showed us a great 14-mile trail that took us to Fisher Point. 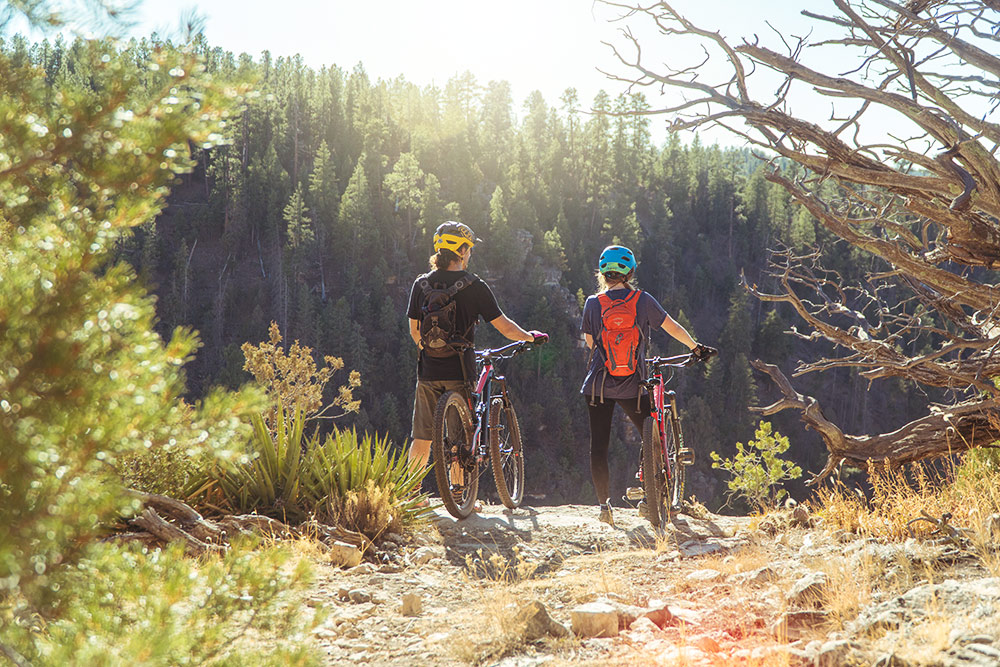 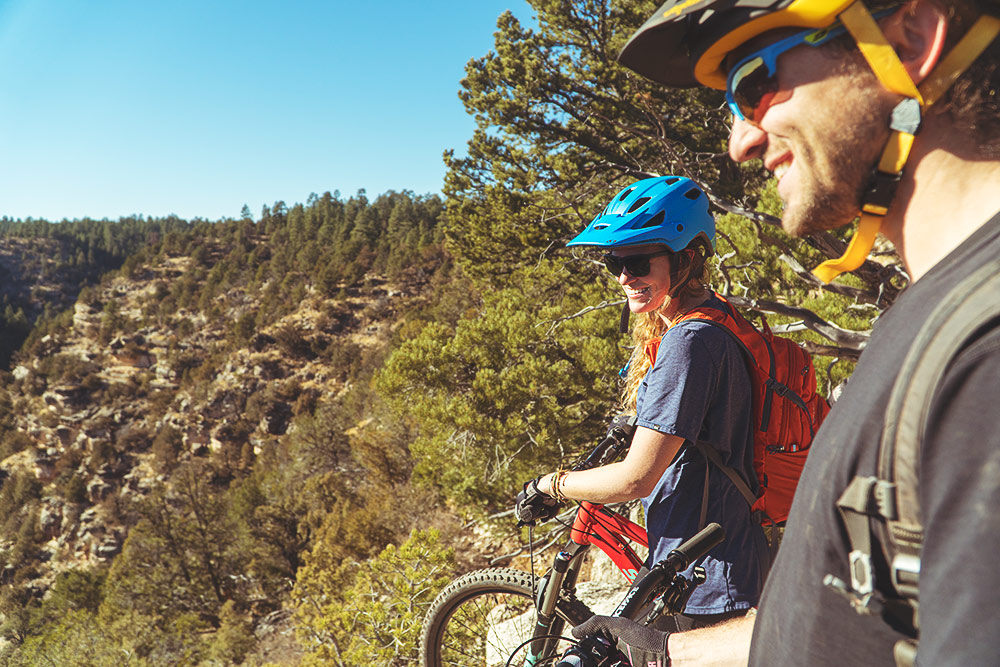 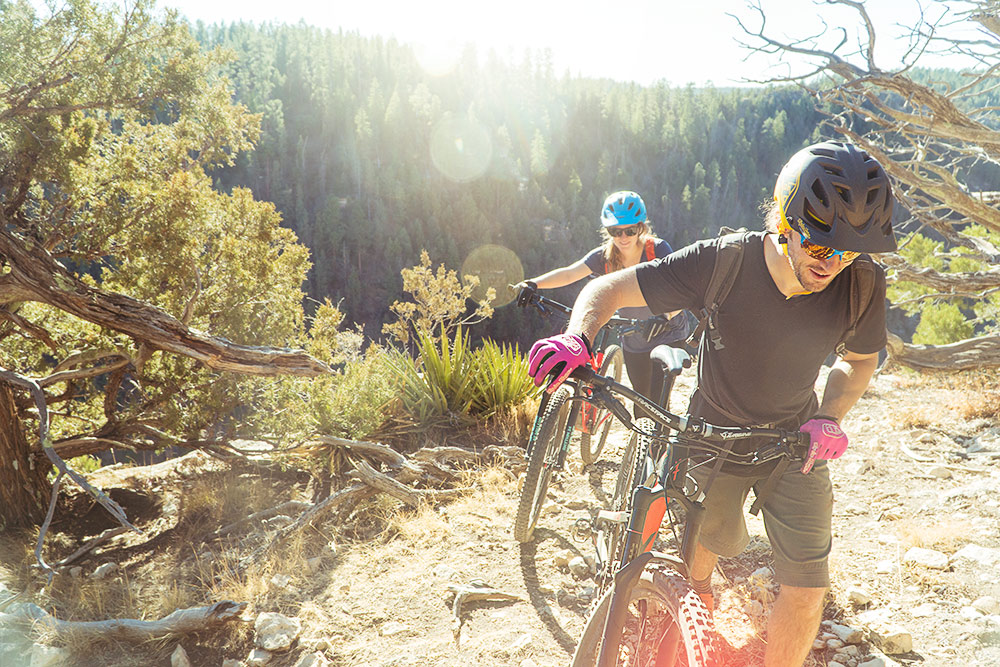 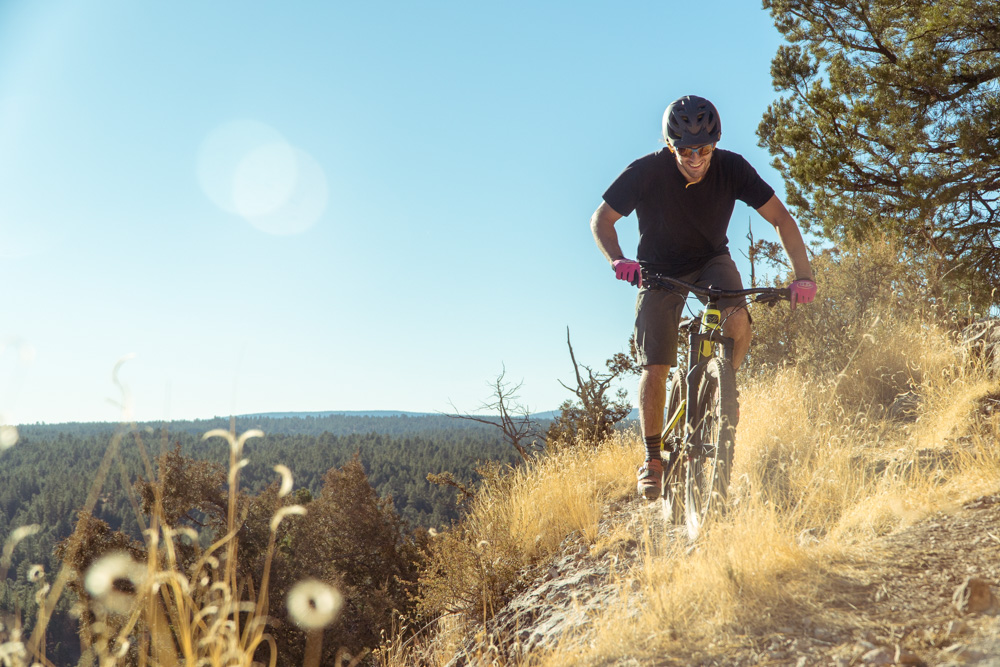 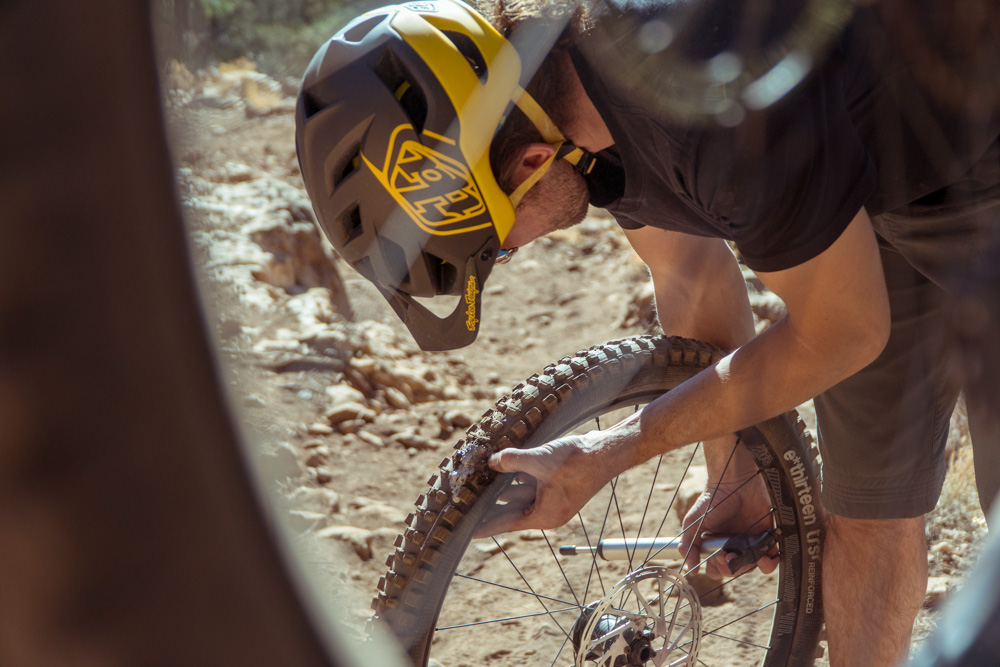 Of course, Alex had to pop a tire – a hole even the magic of tubeless couldn’t fix. 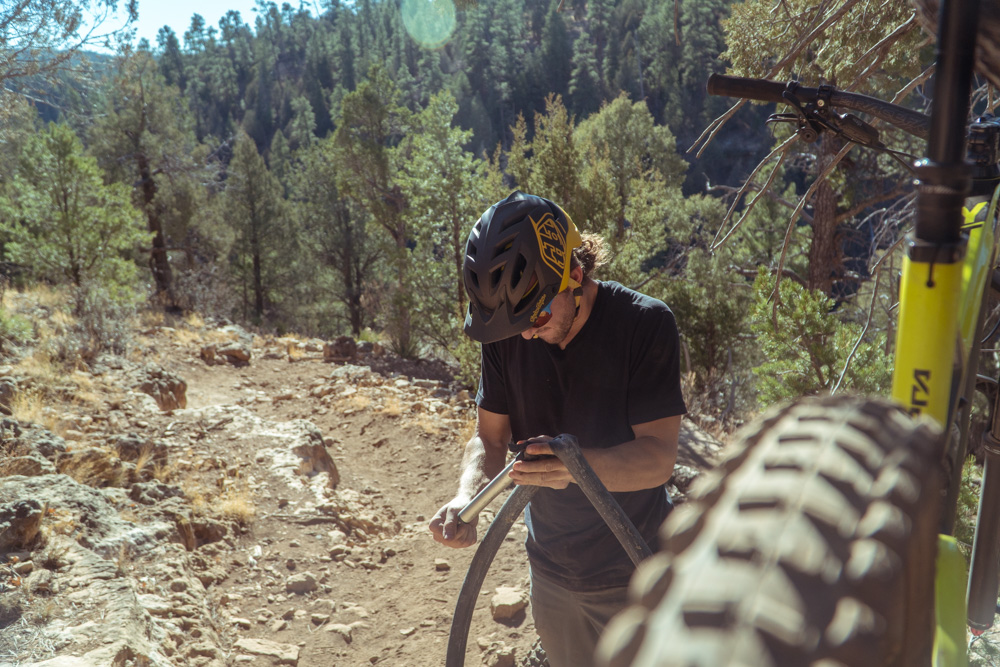 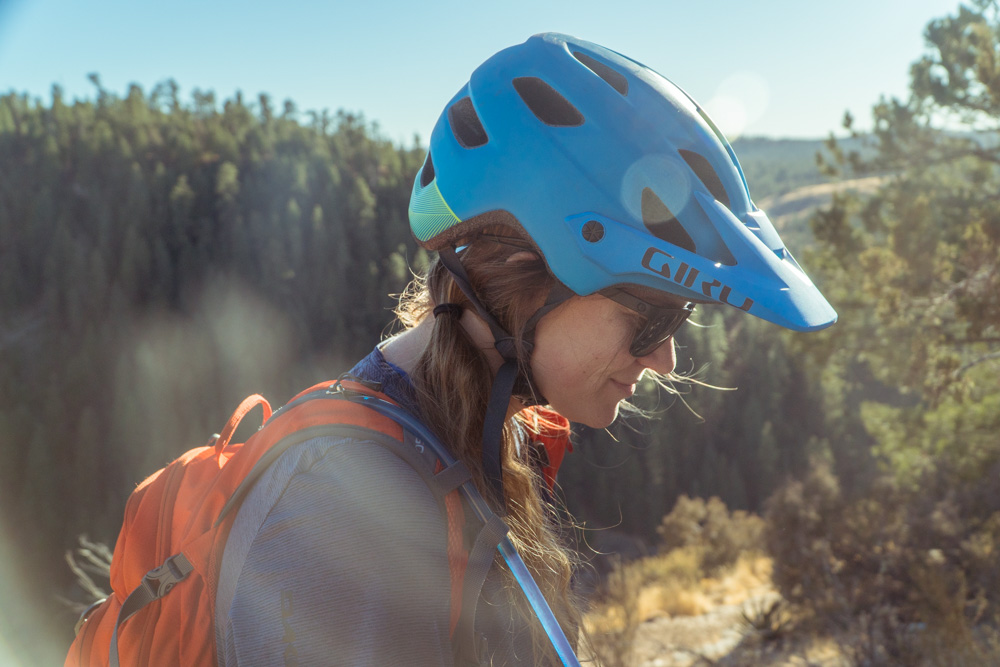 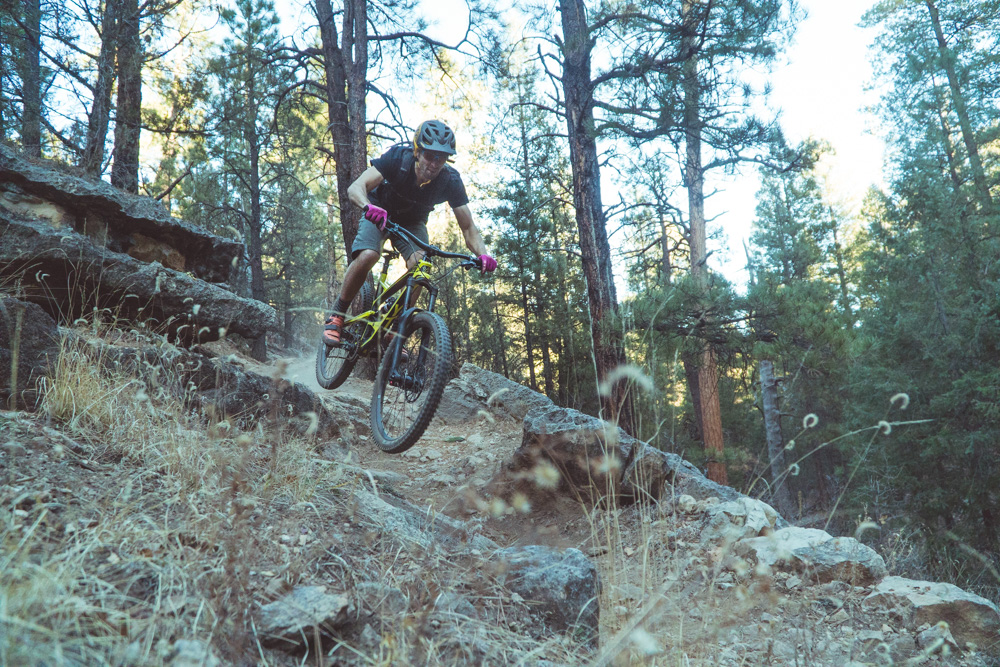 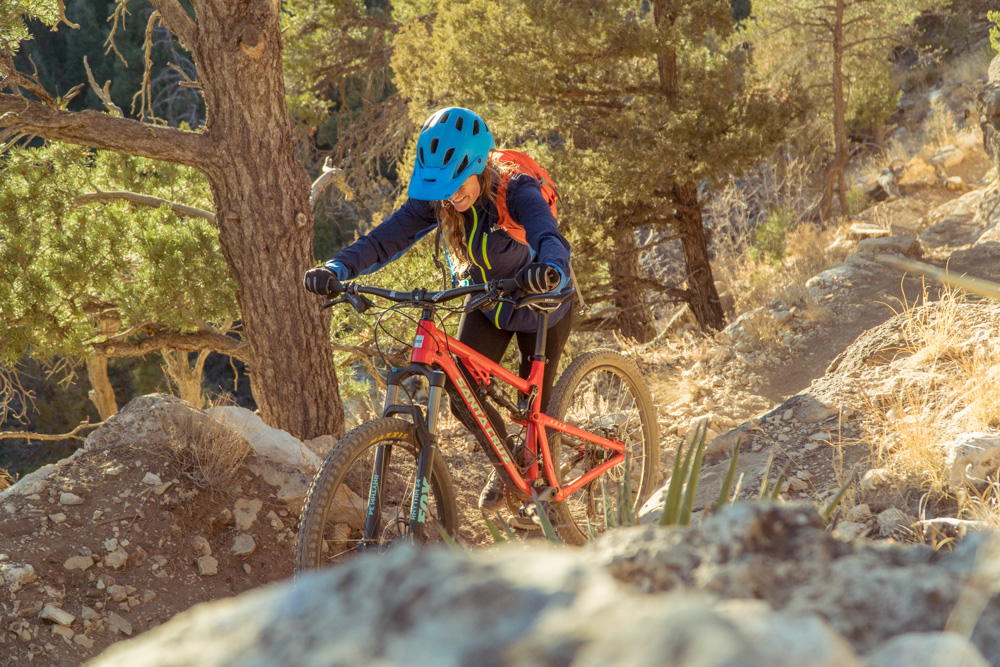 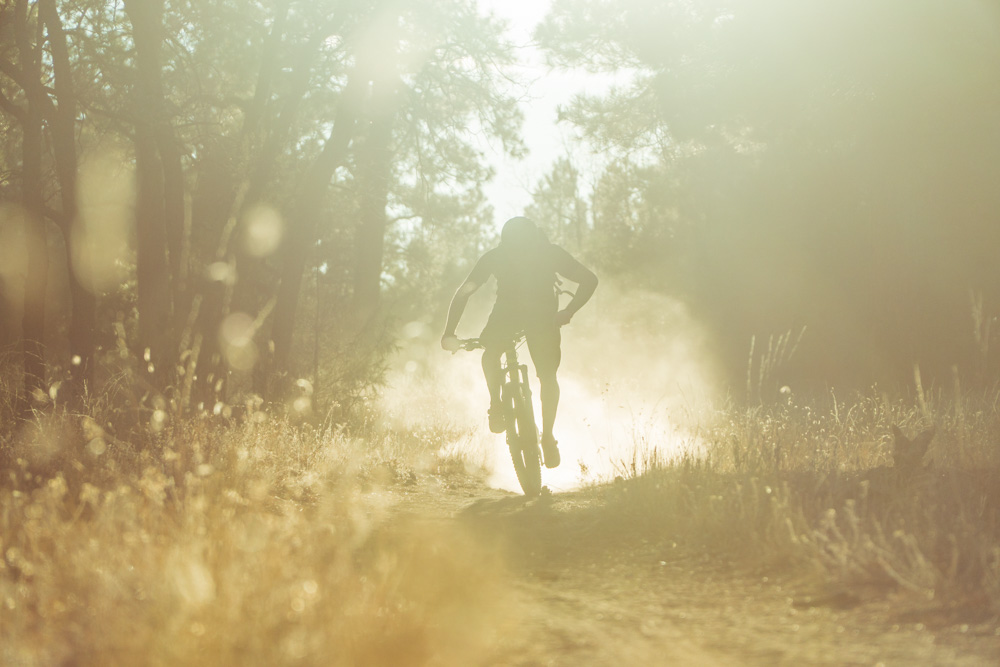 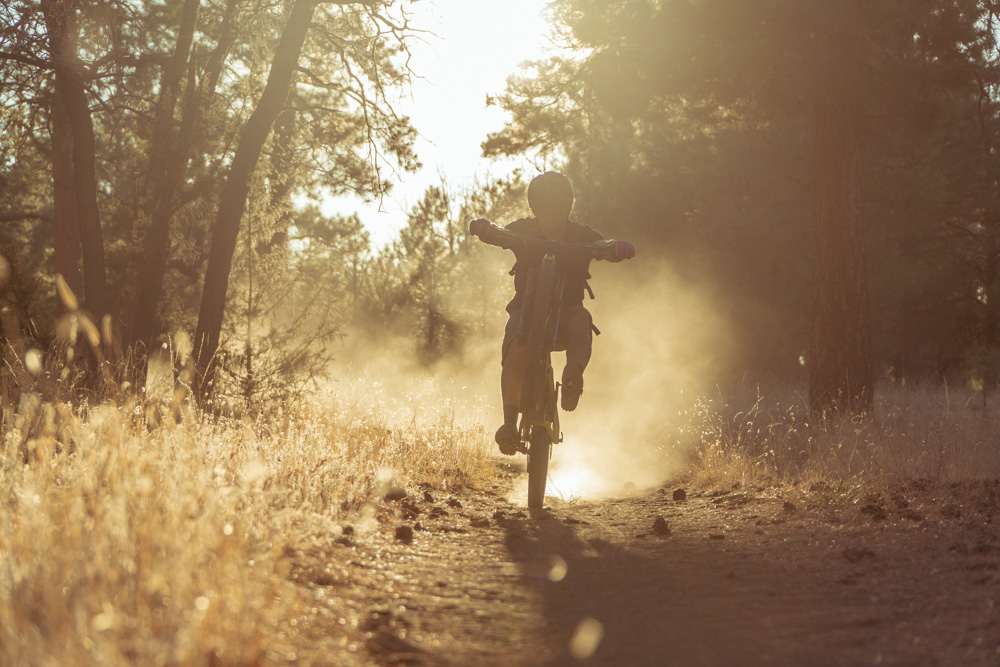 I got to ride the next day in Sedona, but was too busy having fun to take photos. Over the next few days I did several photoshoots with a yogi/dancer, pro mountain biker, and a trail runner. Hope to get these up soon! 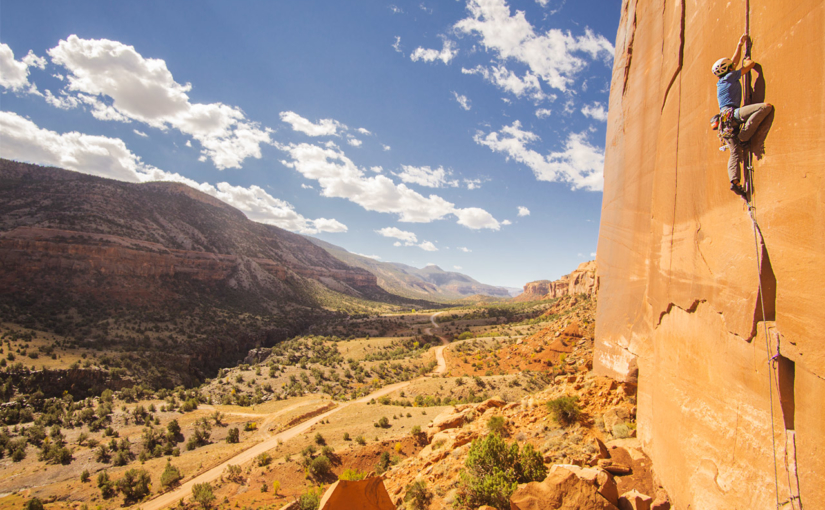 I originally heard of Escalante Canyon when I traveled to Ouray for the first time, three weeks after I moved to Colorado, to go to the Ice Festival. I had never been crack climbing in the desert, but it sounded awesome, so I put it on a mental checklist. l’d been meaning to get to this area that’s only about an hour from Grand Junction for three and a half years.

Alex Vidal and I finally made a trip out there a few weeks ago. It was great! Perfect weather, great climbs with awesome people.

We pulled into the campsite just before midnight. I slept on a picnic table covered by a small roof, and in the morning I saw a GMC pickup pull up and suspiciously look around. Neil Longfellow found us. He’s been living in his truck wandering around the desert for a few months.

The climbing is similar to, but shorter than, Indian Creek. After spending quite a bit of time struggling up incredibly stout and powerful climbs in Vedauwoo this summer, the desert hand crack style felt so “easy” and precise (for the most part). After a short, but fun warm up we jumped on an offwidth 5.9 called Junk Corner (given one and half stars, but I had so much fun I climbed it twice). I did junk up the skin on my left elbow pretty good.

There’s a lot of vandalism on these walls. People who can’t hit broadside of a barn have to use cliffs as target practice, putting scattered pockets in puzzling locations up the walls. Below TH Crack someone carved a huge “TH”, hence the name. The climb is another awesome warm up.

It was getting hot so we took a break, went back to camp and jumped into the creek. Well, Alex and Neil did. I hate submersing myself in cold water – it was surprisingly cold. 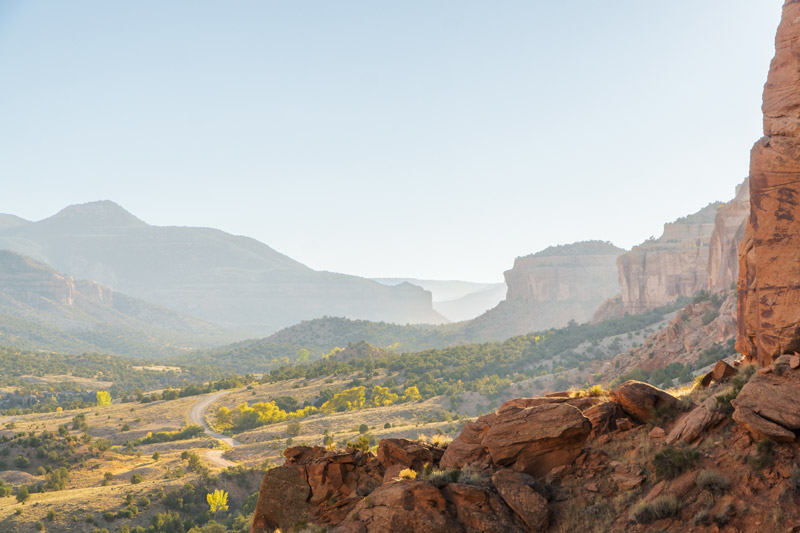 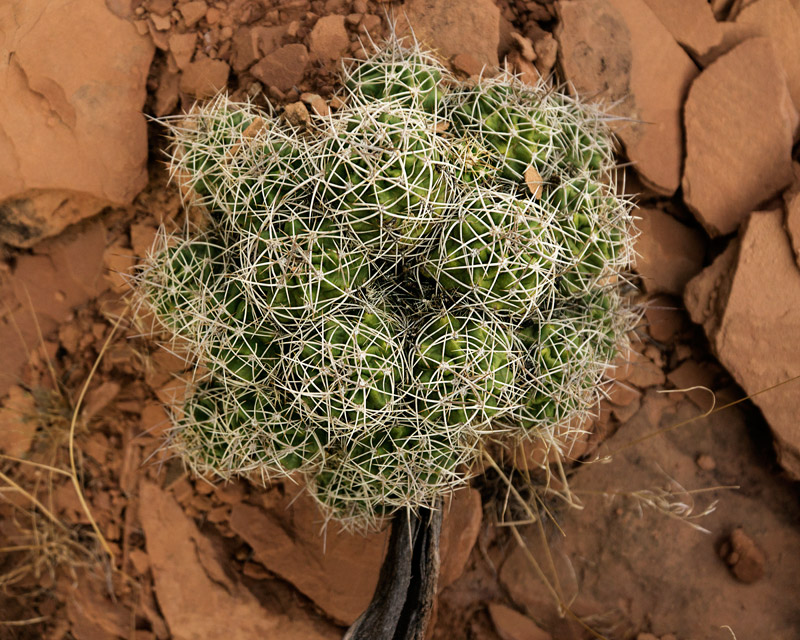 One of the best parts of camping in the desert is the incredible star-lit nights. I finally got some photos of the milky way I’m proud of. 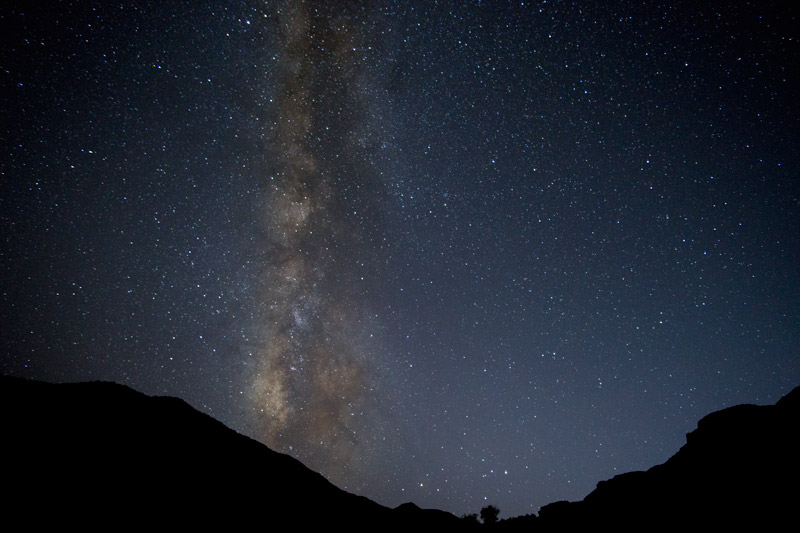 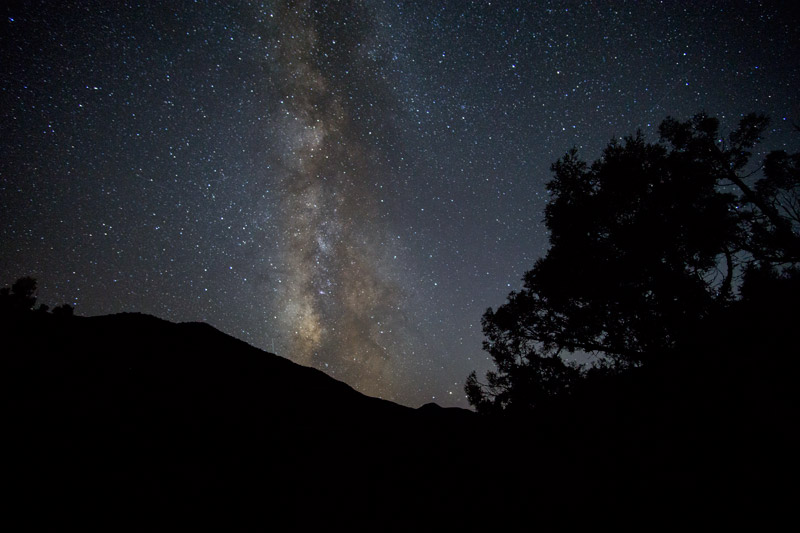 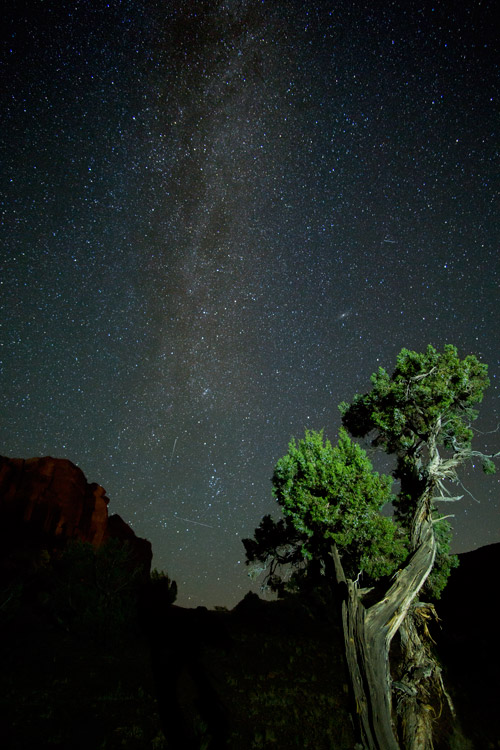 We climbed the second day at the Interiors Area again. We warmed up on Unknown I (5.9) which starts out as an overhang roof that you have to pull with offwidth moves, once on top of the roof it goes to extra wide #6 slab crack. Right where it gets desperate you’re able to grab the start of the 5.10+ crack and jump up to a small platform to the bolts.

From our campsite we were eyeing the Keyhole route, a 5.10a splitter small hands .75 splitter with “keyhole” pods. The movement through the pods is really awesome, and it was really the first indian creek style crack – uses mostly one size cam the majority of the way up – climb I’ve led. Especially in the size that wasn’t just perfect hands the whole way up. Super-tight hands and fingers is all technique, and if you don’t have the technique it’s next to impossible. If you do it can be like climbing a ladder. Dealing with feet on these kinds of routes is probably hardest part. In the crux of this route I was able to lieback through the thinnest section and paste my feet on the slightly uneven crack.

The Interiors area is called that because of two routes that are in a cave created by a detached pillar. To get to the routes you pass through Pinball Chimney 5.9+++R. It only has one confirmed send, but didn’t stop Alex from playing around on it. 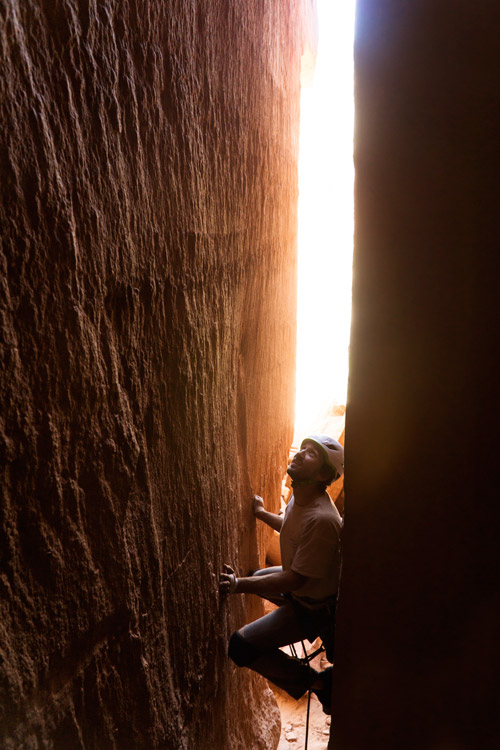 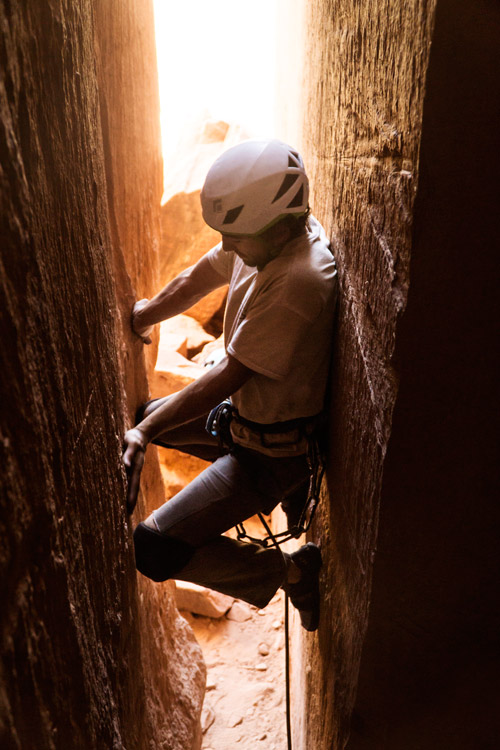 The two routes on the interior are amazingly fun and protected from the heat of the day. The namesake route is a 5.9- called Interiors. It starts up this 5.Fun (5.7?) crack ramp, where it seems like most people on mountain project stop and traverse out to a set of anchors for The Shaft, but the meat up the route starts there, and it’s very fun 5.9 climbing up a dihedral for another 25-30 feet. The anchors are on a detached block behind you that you have to chimney up to, one of the most unique anchor clipping motions I’ve done.
The other route in the cave is The Shaft 5.10a, a dirty but fun climbing up a dihedral with a couple different cracks. There’s a suspect internal flake that I wouldn’t place gear behind. Definitely a route worth climbing, slightly easier than Key Hole.
The light later in the day in the cave is so incredible, but we had to take off back to Boulder before I got any photos of climbers on these routes. Looking back that was a mistake.
I felt far more comfortable and strong over trad gear in Escalante Canyon than I have since I broke my back over 2.5 years ago. I blame the struggle fest that is Vedauwoo improving my technique so much. At the end of the second I was so psyched and energized by these climbs I wanted to do 10 more, but Alex and Neil were wiped. I found one last climb that I knew would wipe me out, a super wide offwidth on the outside of the cave called Fondon’t (5.9++)

I had definitely never led anything like this. I had to fight my way up 20 feet before I could place my first piece, a tipped out #6, the widest cam. I had to worm up, finding body positions that pinned just the right part of a knee or elbow or head or shoulder to keep me from sliding out and landing on the rocks below. The positions where it’s possible to move upward are the positions where it’s possible to fall out. The body positions where you’re locked in to the point of relaxing and taking a breath, I found it all but impossible to move from. Getting in and out of those two main positions I found to be the crux of the route. It’s a full body battle agains the rock to move and keep you in it at the same time. I bumped the #6 higher in the crack till it was finally good enough that it might have held me if I statically took on it, and pulled myself out of the offwidth crack onto a small ledge before the rest of the climb up 5.8 crack and slab. I huge sigh of relief and a proper mount of exhaustion. Now. Now I was ready to go home.