I tend to move fast and light. Discussing our approaches to photography a while back, Casey Brooks and couldn’t be more different when it comes to equipment. I carry everything in a backpack, using what I can for light stands, light modifiers, and scrims. Casey said, “I like to work out of a truck.” She has a lot of equipment, and it’s awesome! I wish I had all everything she has. But we made very different choices after we graduated school. She has worked to establish herself in the fashion photography world, and she’s killing it! She continues to pump out amazing project after amazing project; continually getting better. I moved myself all the way across the world, working mostly on my own and on the fly.

In college we were not really taught anything about lighting with off-camera speedlite flashes; so I spent a lot of time playing and figuring out how it works. Messing around is the best way for me to learn new ways of doing things, but also reading blogs like David Hobby’s The Strobist helped to inspire me.

I started traveling with the Orbis Ring Flash, and it became an invaluable part of my photography set up. By using it as an off camera diffused light and holding it away from the camera it helped me create these travel portraits.

In the past year, maybe two, I have done the great majority of my photoshoots using only off-camera speedlites. They are easily modified and easily moved. It’s quick set up and take down. With proper modifiers you can make the quality of light almost anything you want. There are of course down sides, but you learn to work around them.

My former professor of photography, friend, and (for a brief time) former boss, Rob Curfman asked me to come do a presentation for his Photo Illustration class at Indiana Wesleyan University. I always love an opportunity to meet up with Curfman.

He asked me to give a presentation on off-camera lighting to his class that has been experimenting with these techniques. I am really glad he has added this to his course, it will prepare his students much better for working in real life situations. That being said, the world of “strobist” photography has changed drastically in the three years since I’ve been in school.

The class steps out into the cold yet beautiful late afternoon light to experiment with a few different lighting techniques. I start with the built-in Canon E-TTL wireless system (Nikon CLS equivalent) which uses a Canon Speedlite 580EXII as a master commander unit and 430EXII’s as slave units. From the 580EXII you can control different groups of slave flashes through the infrared signal. I point the 580’s flash head directly at the 430’s receiver to maximize the reliability (especially since we’re shooting outside in direct sunlight). If you have gaffer’s tape it’s a great idea to use it to block the sun from hitting the infrared sensor by taping a “flag” on the sun side.

With a student acting as my light stand I have him hold the flash high on camera left. When hand-holding off-camera flashes, people have a tendency to hold it at chest level. This casts very unnatural shadows on the subject, as most light comes from above. Start with the safe position of 45º to the side and 45º above the subject. From there you can experiment and change the light as much as you can imagine.

Here we are experimenting with light position. Mixing flash with a good ambient exposure works in this example. The ambient light on the model’s face still shows enough details, and the sun’s highlight along with the flash fired from behind the model’s position highlight the structure of his face. Also, keep in mind to keep the flash high or you’ll get a very distracting shadow cast from the model’s shoulder.

Multiple flashes can be expensive with 580’s running $425 and 430’s running $270. There are cheaper options for quick and easy lighting solutions. One of the best multi-use tools is a 5-1 collapsible reflector. For under $50 you have a lightweight tool that you can carry with you easily that is extremely powerful in the variety of what it can accomplish.

This example shows the difference between using a reflector and not. I used the silver side and brought it in close to the model. The reflector reflecting sunlight back onto the model acts like any other light source. The closer to the subject the softer the light and the brighter the light (the inverse square law is still in effect). You can use the reflector in any number of positions to create different light effects. Here I use it as the key light. I keep it high, to emulate natural light. Again, with reflectors people have a tendency to keep them at chest level which gives an unnatural light, lighting under the nose and casting strange shadows. If you’re using the reflector as a fill light, though, it is perfectly fine to come in from below to fill in the dark shadows.
Another way to use the 5-in-1 reflector is stripping off the outer cover to reveal the white, translucent center. Again using Canon E-TTL wireless system I trigger the 430EXII, but this time I have the reflector between the flash and the subject. The reflector spreads out the harsh light coming from the tiny flash head and enlarges it to the size of the reflector, in this case 42 inches. This softens the light and gives it a really nice quality (a very cheap softbox). Remember to keep the flash head far enough away from the reflector that the light is hitting the entire surface of the reflector. If the flash is too close, you are only enlarging the source of light by a few inches.
The last demonstration I did was to show how to use radio slaves. I use the Paul C Buff CyberSync system, which I have talked about before. I shot these with bare speedlites just in the name of time. The light is a bit harsher than I wanted for these shots, but we were losing the sunlight. In the shot below, a negative of the speedlite can be seen in the photo below…the nose casting a harsh shadow across the model’s cheek. This shot says to me, it was shot with a speedlite. I did not use any fill to minimize that effect either. To camera left and behind the subject is a second flash showing some details on the shadow side. 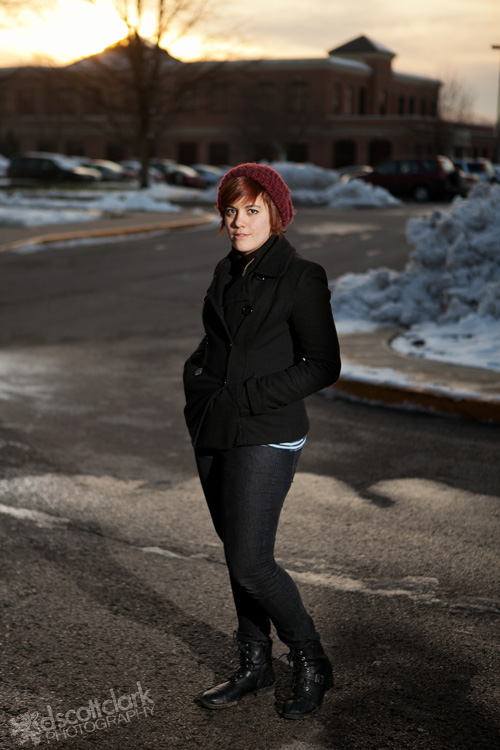 In the last photo I changed the position of the keylight, added a fill on camera left to minimize the harsh shadows, and sent my accent light as far away as he could go. The purpose of this shot is to show one of the key advantages of radio slaves over the E-TTL wireless system: distance. the E-TTL system is limited to about 30 feet. It is difficult to get a reliable result any further than that. With the CyberSyncs I was able to get the flash to fire from 150 yards (the student holding the light was standing next to the building in the background, shown in the red circle below. 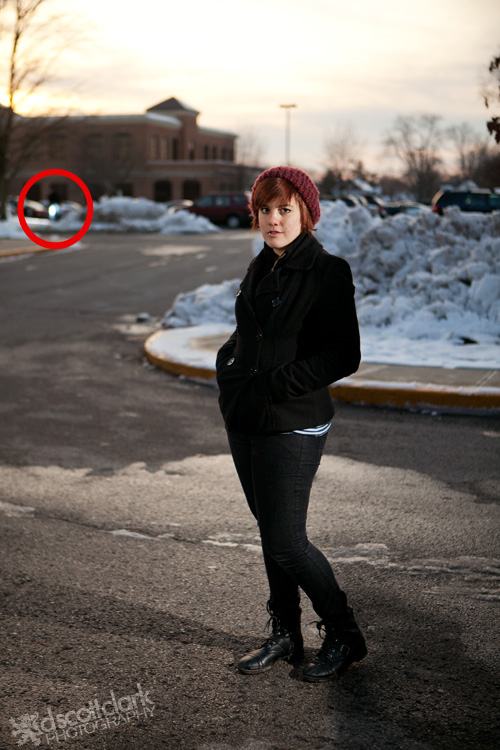 I had a blast showing the students the different techniques, and stayed and talked for a couple of hours. It’s always encouraging when students are engaged and asking questions. This relatively new form of photography is only going to continue to grow. I’m glad to see the students latching onto it.