This winter has been poor when it comes to good quality snowfall. I feel like Boulder has had more snow than any of the Summit County ski areas. Anyway, last Sunday I met my friend Nick, and we went to Breckenridge. I was betting that because of the Super Bowl people would be staying away from the slopes, even though it was a gorgeous day. I think I was partly right, but then again, I don’t really know. We didn’t see much of Breckenridge (proper).

Without much a plan, we just started going up. We took the T-bar lift to the top of Peak 8 and decided to traverse Peak 7 to the ski area boundary line. Everything we passed was super chopped up, and off in the distance we could see fresh, untouched lines coming from Peak 6. Eh, why not? We duck under the boundary line and make our way around the mid section of Peak 7. We find a path where a few others have ventured off with the same plan and start the trek up the south face of Peak 6. Where the wind has blown off the loose snow and it’s rocky the walking is easy, but as soon as you step away from the rocks you find yourself almost chest deep in powder. 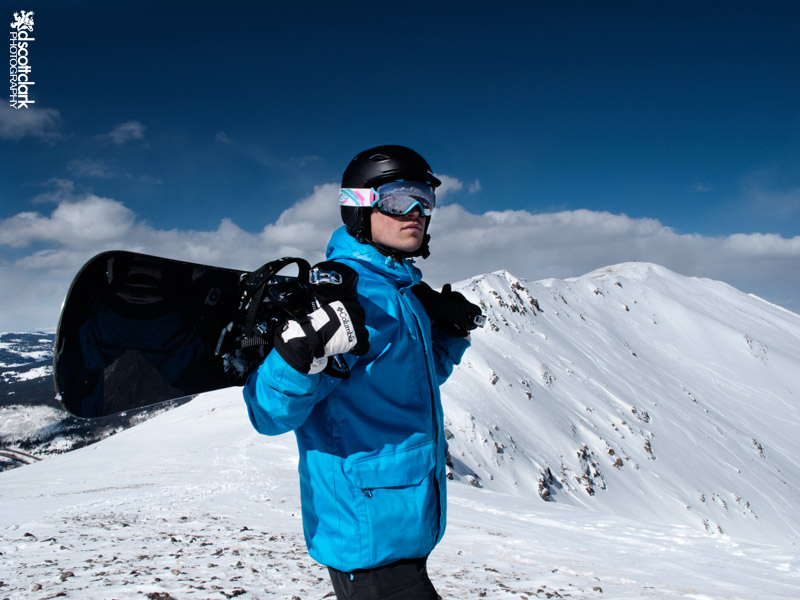 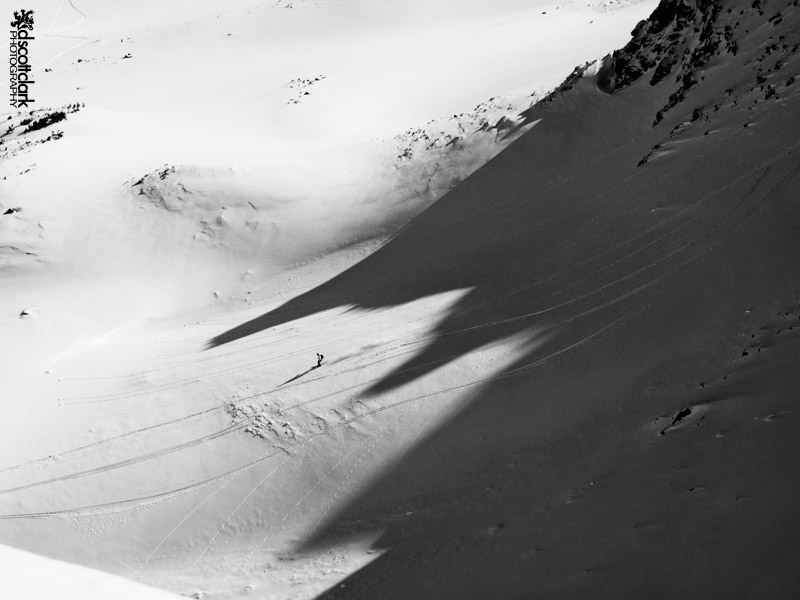 Going down takes a lot less effort than the approach, but we stop and make the most of it. I drop in first so I can get in position to photograph Nick coming off the cornice. The first turn is on super hard pack, but the further down we go the better the snow gets. We’re floating in powder; jumping off small clifflines into pillowy soft landings. By the time we reach to bottom of the bowl we’re not ready to quit. 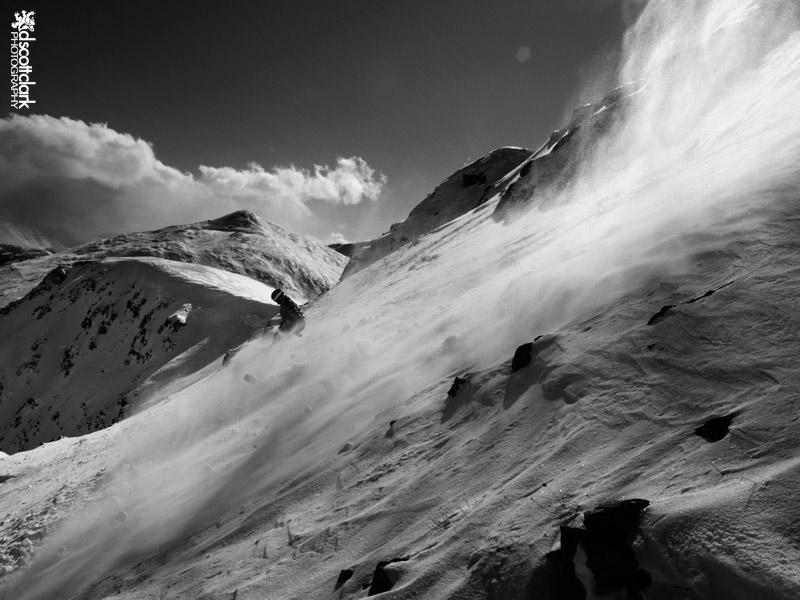 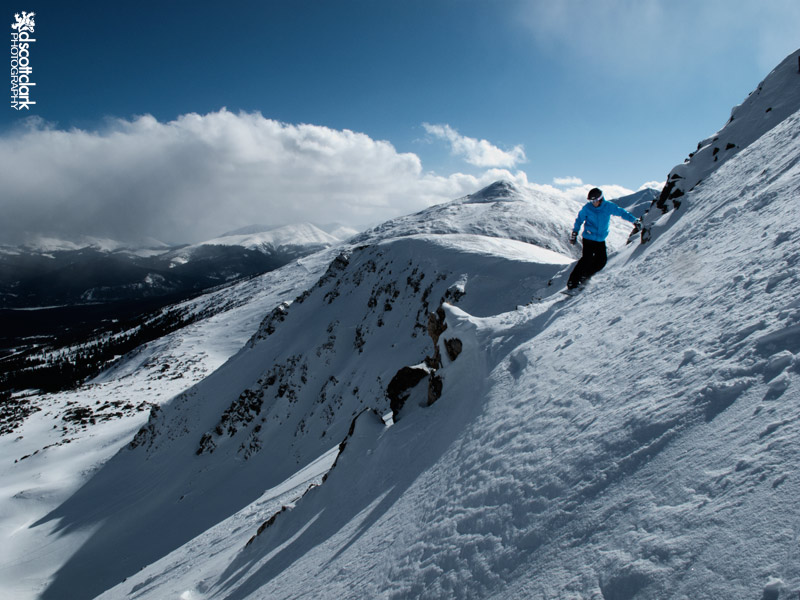 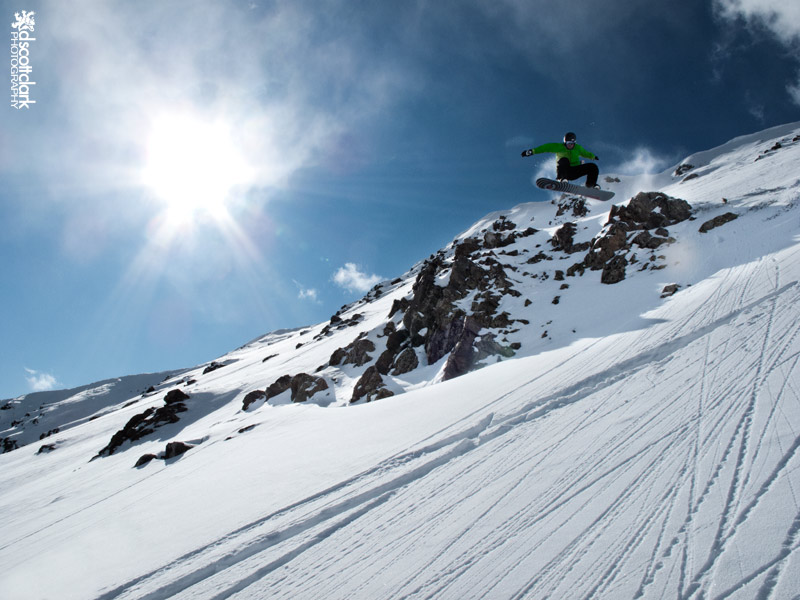 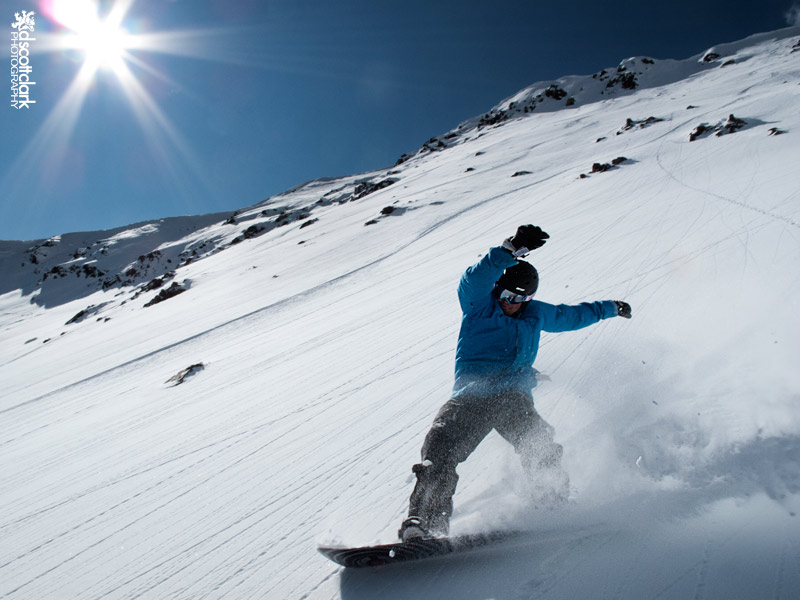 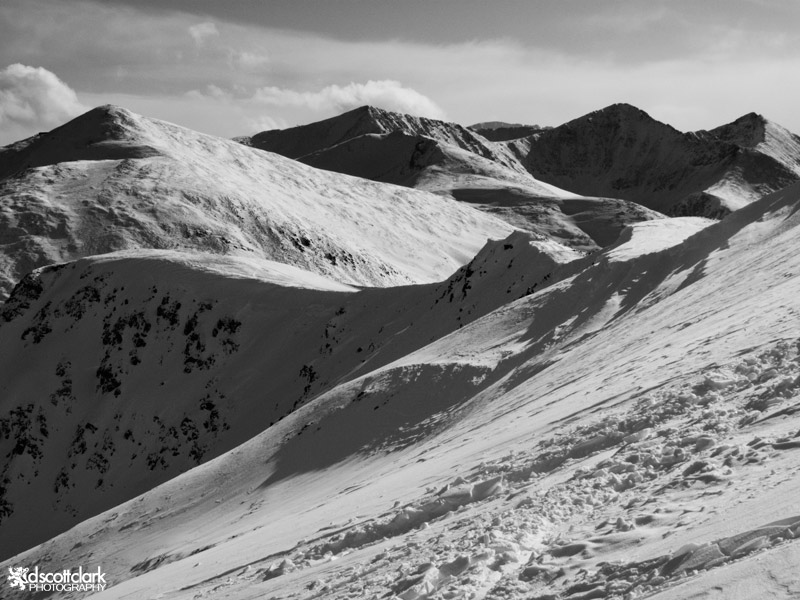 We decide to take a second lap. The conditions are just too good to only get one run in. So, off come the skis and we start the push up the north east face of Peak 6. There is a trail here as we are not the only ones doing laps.  Two snowboarders pass me, one on a split board with climbing skins and the other using snowshoes. A split board is a snowboard that separates into two boards you can wear like skis for ascending and traversing. Climbing skins attach to the bottom of your skis or split board and allow you to glide forward to prevent you from sliding backwards, which makes ascending much much easier. I need to buy skins for my set up, making my life a lot easier.

Speaking of…both guys mentioned to Nick and I that we shouldn’t be in the side country without avalanche safety gear. This is true. Things I need to get: a beacon, a shovel, and a probe.

Climbing the northeast slope almost destroys me. Climbing at almost 13,000 feet: I am not accustomed to this. Nick gets to the top in what seems like an hour before I do. Each step up my boot sinks into the snow making each step even harder. I take five or six steps and have to stop to catch my breath. At times, when I’m sinking up to my waist, I just start crawling. I think this probably looks pathetic, and I start thinking to myself, “I am the tortoise. I can win this race. Take each step slow.” And with one step at a time I slowly make my way to the summit. After a few minutes laying on my back, staring up at the blue sky, my body forgets the pain that it’s in. 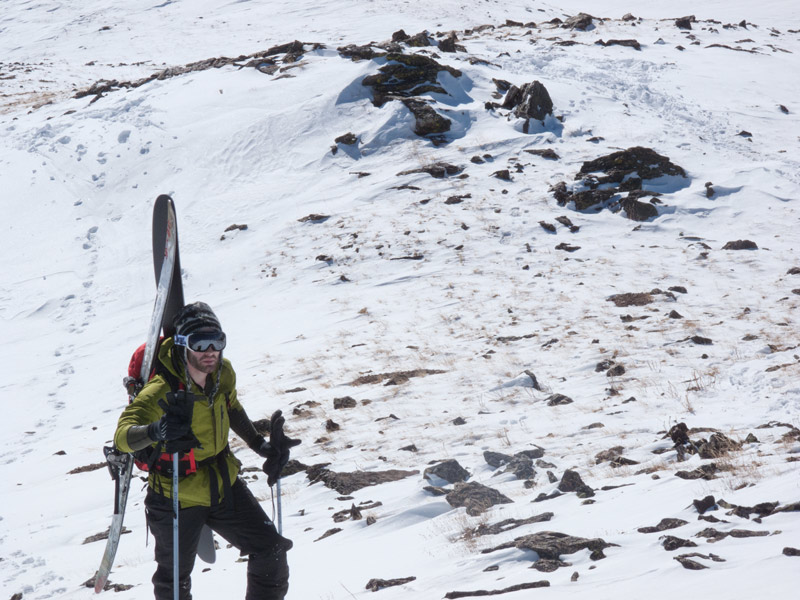 We take our victory lap slicing through the thick powder, jumping off of small clifflines and enjoying the soft landings. It’s time to head back in-bounds in Breckenridge. We can see where we need to go. Just head as far right as you can. We traverse right but reach the tree line before the boundary. Once in the trees Nick has trouble keeping his short snowboard above the powder, but we keep moving down the mountain. We’re making our way to the right while still pointed down hill – apparently not far enough south. We come out on a cross-country ski path that shoots us out into a residential area. Skiing on the snow-packed road we figure we will pop out at the resort sooner or later. After a couple of miles we finally come across a lady walking her dog who informs us, “You’re still over a mile from the base of the resort and it’s all up hill from here.” Thankfully, a young guy in a Jeep stops and gives us a ride the rest of the way. We get to the base of Peak 8 at 3:50pm, just in time for one last run, which means we technically got 3 runs in on this great great day! It was Nick’s first time at Breck and he still really hasn’t ridden Breck.